The Case for Light Rail

The current approach to public transport in Wellington is no longer tenable. Proposed investments in the bus system will bring welcome improvements, but will not achieve the step change in public transport patronage that Wellington needs. Our aim is to double ridership by progressively building a world-class light rail system in Wellington city. The best way to reduce congestion in Wellington is to encourage people out of private cars and buses onto light rail. The first stage, between the Railway Station and Miramar, via the Hospital and Airport, could be completed by 2027, for an estimated cost between $570 and $750 million, depending on the route.

What’s the strategic context for the proposal?

FIT stands for fair, intelligent transport. FIT’s vision for Wellington is a modern, vibrant city designed around the needs of people. Wellington will be:

FIT sees light rail as the essential infrastructure for realising this vision. Light rail is a form of public transport designed to provide fast, efficient, clean service to people living in urban areas. It uses electric rail cars, running on tracks in existing roads, separated from, and with priority over, other road traffic. It carries lots of people, with connections to buses and suburban trains at major interchanges. One multi-segment light rail vehicle can carry as many passengers as 7 buses, at twice the average speed.

This paper sets out the case for light rail in Wellington.

What are we trying to do? State the objectives clearly, using no jargon.

The current Wellington transport system over-privileges the needs of private motor vehicles, to the detriment of a reliable, fast and convenient public transport system. There are 3 problems which make this approach no longer sustainable.

How is it done today, and what are the limits of current practice?

The investment logic behind Greater Wellington’s indicative business case for introducing BRT identifies three problem areas: failure to maximise the capacity of key corridors for moving people and goods; increasing congestion within a constrained corridor that will continue to impact on levels of service; and failure to grow patronage due to unattractive and unreliable public transport services.

The problem of moving traffic is primarily a peak hour one. Maximising capacity will never be achieved by expanding road space along the primary route from Ngauranga to the airport, nor by the proposals for BRT on key routes. Efficient movement of people and goods will only be achieved by introducing measures to reduce traffic volumes entering the city, particularly at peak hours. The best way to reduce traffic congestion is by using congestion pricing to restrict parking and road space for private motor vehicle traffic, while making public transport more attractive.

The problem of congestion is self-evident but current projects, particularly the new motorways north of the city, will make the situation worse. When the Kapiti Expressway and Transmission Gully are finished, Wellington will see an estimated 11,000 extra vehicles entering the city each day. This increase will negate any potential improvement on levels of service.

The proposed solution to Wellington’s public transport problem, BRT based on double-decker buses and an all-diesel bus fleet, will improve the service, but will do little to reduce bus congestion or bring about the step change in performance and patronage that Wellington needs. The time frame for electric buses is unknown and achieving full replacement could take much longer than expected. A proposal which ignores climate change and does not aim at quickly reducing CO2 emissions is not fit for purpose.

While BRT can work well, Greater Wellington has acknowledged that the BRT system proposed is low grade and below Gold, Silver or Bronze standard. It does not even qualify as “BRT-light”. The system will make only a marginal difference to operating conditions in the city centre. It is cheap but ineffective. Even should BRT be implemented properly, it will not achieve the ride quality of a rail-based system. Overseas experience shows that people who are not prepared to get on buses will get on light rail.

In cities with narrow streets, BRT is a poor substitute for light rail. Overseas, whenever it gets difficult the traffic engineers give up and send the bus into the general traffic lanes — if it’s a light rail car, the system has to be engineered from end to end. Wellington cannot afford to waste time and money developing solutions which won’t produce the benefits light rail can deliver. The need to move to low carbon transport is urgent.

The downfall of double-decker buses is the slow boarding and alighting times at busy stops. They have high capacity but will clog up the shopping streets even more than the current bus fleet does. Double-deckers work well on express routes with few stops; everywhere else, they slow the system down and cause congestion. A public transport system based around double-decker buses will not attract substantial numbers out of their cars.

The flexibility of buses, often stated as a strength, is their weakness. Car drivers and delivery vehicles can park in priority lanes in the knowledge that buses can always drive around them. At signals, buses usually have to blend in with other road traffic to get through intersections — even when they are given priority, they are still treated as just another road vehicle.

What’s new in our approach? Why do we think it will succeed?

Creating a healthy and safe city involves more than just dealing with transport issues. It involves transport planners and urban designers working together to develop public spaces in a way that facilitates the effective movement of goods and people, and also accommodates their leisure needs. In New Zealand, road and traffic engineers have traditionally driven transport development and the role of the urban designer has been secondary, if not totally ignored. We have had numerous international visitors to our shores promoting the idea of urban design first, traffic engineering second. FIT has based its proposal on their advice and research.

FIT aims to bring about a major mode-shift from private car to electric public transport. To achieve this shift, FIT proposes to:

A key strength of light rail is its lack of flexibility — it says to passengers, this is a permanent route you can rely on when making decisions about living and working. It says to car drivers — do not park on the rails; and to road engineers — give this route priority. And it gives investors and businesses long term certainty. In short, counter-intuitively, inflexibility works.

A line from Miramar to the railway station via the hospital, continuing to Johnsonville, Karori, or Petone, is an initial work programme that satisfies these principles. The first proposed project, from Miramar to the railway station with connections to the commuter train network, will start to realise light rail’s benefits for Wellington and prove the concept. Johnsonville, Karori, and Petone are examples of options for future extensions.

Freeing up space for light rail in Wellington’s often narrow streets will be achieved by moving on-street parking off-street, limiting vehicle access, and reducing the number of buses through the city centre. The price of central city parking and congestion charges will be instrumental in giving drivers an incentive to leave their cars at home and take public transport.

While this approach to public transport is new to New Zealand, cities in other developed countries have been implementing it successfully since the 1970s. There is no reason to think Wellington will be any different.

Who cares? If we are successful, what difference will it make?

The principal measure of success from investing in light rail is that improved public transport in Wellington city attracts people out of their cars and onto public transport. This will result in the following benefits:

To be an attractive alternative to the private car, public transport must: go where lots of people are; be there when people need it; and make trips fast, predictable, and reliable. Light rail is the best way to do this, offering 3 times the capacity of a 4-lane highway. Trips between the Railway Station and Miramar would take about 20 minutes, with a tram every 5 minutes.

Light rail is a congestion-free transport mode. A well-designed light rail system can scale to absorb growth in passenger numbers without the system slowing down. This can be achieved by making the light rail cars longer with additional modules and by increasing the service frequency. Unlike buses, the time taken for people to get on and off does not increase as passenger numbers rise, so travel times stay the same and remain predictable.

Overseas evidence shows that investing in light rail creates an economic halo around the stations along the corridor. The area within about 400 metres of a station becomes a focus for commercial, social and residential development. When stations are placed about 800 metres apart — closer together in the city centre, further apart in the suburbs, but always close to major destinations — the result is a rich and vibrant urban environment. This economic halo in turn drives light rail revenue growth.

What are the risks and the payoffs?

Wellington has considered and rejected light rail on several occasions since 1990. The case against light rail generally finds expression as 4 major risks.

How much will it cost? How long will it take?

We have identified feasible and affordable options for light rail and a supporting bus network, but have not identified a best or preferred option, which should await further study and public input. We propose buses and light rail on separated routes, both on or close to the Golden Mile. Interchanges enable easy transfer between bus and light rail services.

We have identified a single light rail route from the Railway Station to Wellington Hospital, Kilbirnie and Miramar. See Light rail route and options. There are options in two places: Lambton Quay (1a) or Customhouse Quay (1b); and Mt Albert tunnel (2a) or Constable St (2b). Only the latter option materially affects costs. FIT is carrying out further investigation to develop and cost a preferred route beyond the Railway Station. 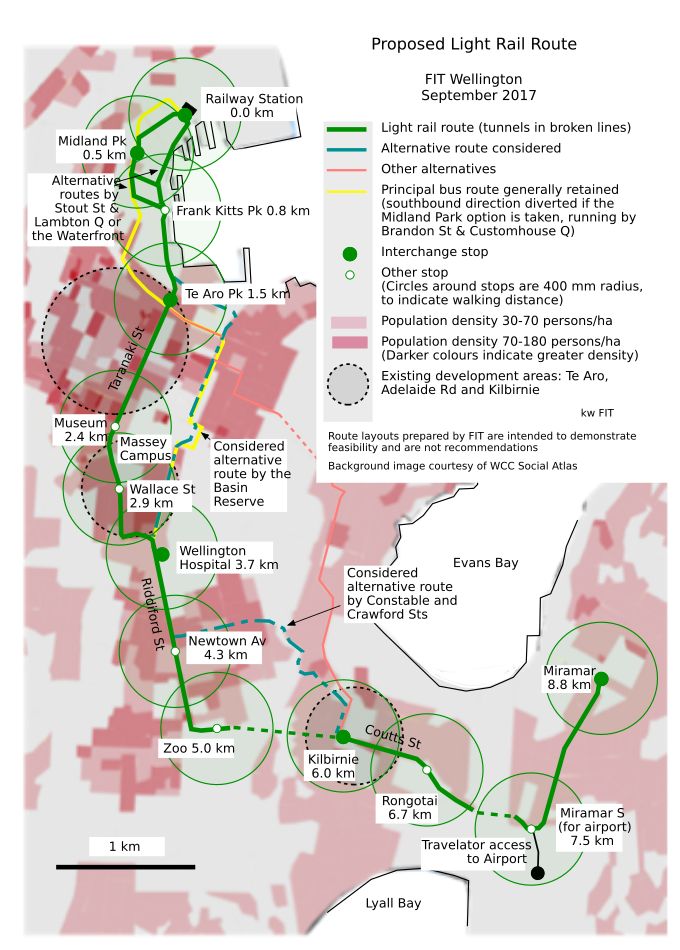 The route is within the area defined in the N2A study, but avoids the Basin Reserve. Multi-segment light rail cars can be difficult on large, multi-lane roundabouts. This corridor is more suited to buses, with no over-riding reason to run high-capacity light rail that way. The choice is between serving the Massey Campus on Wallace St or the schools and proposed high-density development on Adelaide Rd. The Adelaide Rd option warrants further investigation before finalising the route.

Light rail costs have fallen in recent years, and in 2014 the International Railway Journal quoted €25–30m per kilometre ($42–51m/km) for a typical line in France. Now Besançon, France has opened a new line for €17.5m/km ($30m/km). The UK average is £21m/km ($37m/km). Using these figures as a guide, we consider the costs set out in Comparative costs of a and b options are reasonable and conservative. The estimates recognise that civil engineering works cost more in New Zealand than overseas. We have assumed:

FIT acknowledges there are significant technical challenges in the Constable St option, but is confident that the engineers can find workable solutions. Clearly, the cost saving would be considerable — enough to fund over 3km of light rail construction. The money may deliver better value if spent on extending the line north, e.g. to Johnsonville or Karori.

With the right political leadership and commitment, the first stage, from the Railway Station to the Hospital and Newtown, could be open by 2025. The second stage, to Kilbirnie and Miramar, could be completed by 2027.

What are the midterm and final “exams” to check for success?

To bring light rail successfully to fruition will mean passing a number of checkpoints: